Although Toulon was extensively bombed during World War II, the city’s heritage continues to reflect its architectural and artistic trends throughout the centuries. Provence, the historical presence of the French Navy and religion are the three main inspirations for these monuments, which we invite you to discover alone or in the company of a guide. 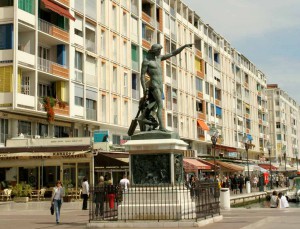 The port – Carré du Port
Fondly nicknamed “Cuverville” (literally meaning “bottom facing town”!) by the locals, this emblematic bronze figure sculpted by Louis-Joseph Daumas stands proudly on the port in front of the Town Hall, his left index finger pointing out to sea. The statue was inaugurated on May 1st, 1847 in honour of King Louis-Philippe. 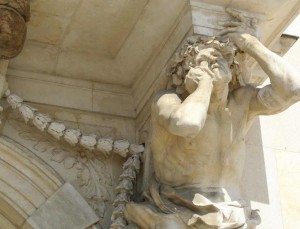 The port – Place Monsenergue, quai de Norfolk
Built in the 18th century, this impressive door, whose pediment is supported by four Greek columns, now guards the entrance to the Naval Museum. It features a statue of Mars the god of War on its left and Minerva the goddess of wisdom on its right. Listed monument. 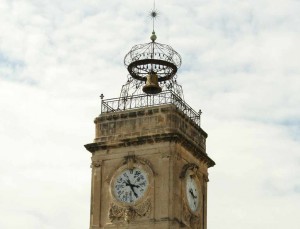 The port – Place Monsenergue, quai de Norfolk
Located inside the walls of the naval base, the clock tower is visible from the main entrance. Built on piles between 1772 and 1775 it was originally used as a lookout post, while the clock housed in the bell tower announced the start and end of the working day. 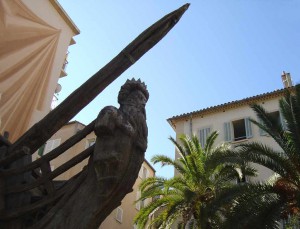 City centre – Place Vatel
Set in the city’s old quarter, this monumental work is a faithful reproduction of the bow of an 18th century Royal vessel. The original figurehead, representing the Roman sea god Neptune, is exhibited at the Naval Museum. 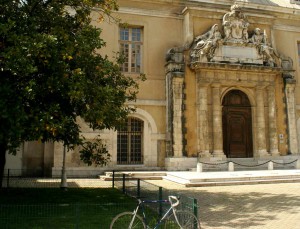 The port – rue Anatole France
This door, built in 1689, now adorns the old rope factory. The coat of arms framed with two children formerly featured several fleur de lis, which were erased at the time of the French Revolution.

City centre – 3, rue Louis Jourdan
Completed just before the French Revolution, this remarkable neo-classical church was originally a Temple dedicated to the atheistic “Cult of Reason and the Supreme Being”. It features a magnificent lit dome situated over the altar.
Listed monument. 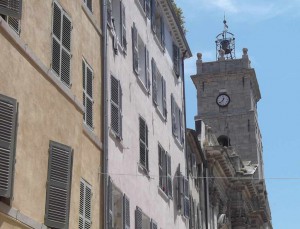 City centre – 55, place de la Cathédrale
The city cathedral is over 900 years old! The building is a curious architectural hotchpotch resulting from the extension of the primitive 11th-century Romanesque church in the 17th century. Its classic façade, featuring baroque details, is topped by a massive bell (1740) and beautiful Provencal wrought iron bell tower. Although reworked several times, the interior has maintained its Gothic harmony, characterized by single vaults. Visitors can admire several interesting items, such as the Baroque marble and stucco alter created by Christophe Veyrier (nephew and student of Pierre Puget). Listed monument. 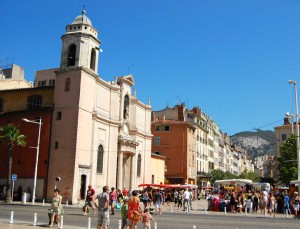 City centre – Port – Cours Lafayette
This church was built in the 17th century to serve as a monastic chapel. With its curved and countercurved façade, it is typical of the baroque churches of 18th century Western Provence. Points of interest include a fine 18th century altarpiece in polychrome marble, plus walnut choir stalls, woodwork and cathedra carved by Sénéquier. Listed monument. 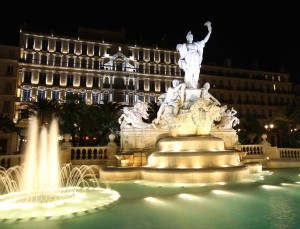 Upper town
This vast square located in the upper Haussmannian quarter forms the hub of the city and is bordered by a cinema, theatre, cafés, restaurants and major stores… At its centre stands the impressive “Fontaine de la Fédération” fountain (1889), created by the Allar brothers. The magnificent façade of the Grand Hôtel (1869), now home to the new Théâtre Liberté, is also well worth a look. 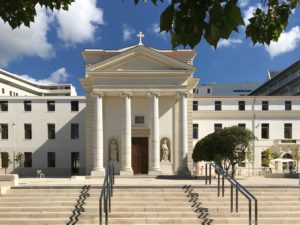 Upper town – Place Gabriel Péri
This garden was created under the reign of Louis XIV. In the last 17th, Bishop Chalucet builds an hospital there. Then, the French Navy rents a vacant part to develop a garden with exotic plants brought back from its far journeys. Nowadays, you can peacefully walk along the garden alleys, have a pic-nic on its tables, or let your children have fun on the playground while having a rest. 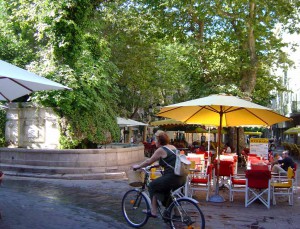 City centre
Toulon’s former main square, built on the site of the ancient grain market. This picturesque Provencal square, set in the shade of age-old plane trees, owes much of its charm to the “Fontaine des Trois Dauphins” (Three Dolphins Fountain) sculpted by Toscat and Chatel in 1780 and literally overflowing with vegetation. Bordered by cafés, it is a favourite haunt for both locals and visitors come to enjoy the freshness of this amazing hanging garden during the hot summer months. 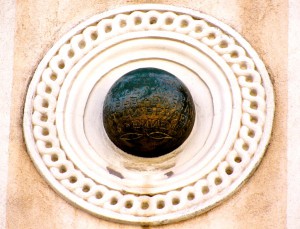 City centre – 89, cours Lafayette
This cannonball embeded in the facade of a house remembers the seat established by the English army in 1793 before the city is released by Bonaparte. 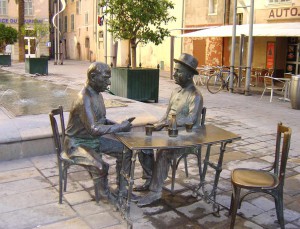 City centre
An archetypal “Toulonnais” and hero of Pagnol’s famous “Trilogy” film series, Raimu was born at n° 6 Rue Anatole France and remains widely honoured throughout the city. Three monuments are dedicated to this inimitable artist (ground floor access): a bust on Place des Trois Dauphins square, a fresco and statue on Place du Théâtre square (by Louis Arride), and a sculpture of Pagnol’s famous Card Game on Place Raimu square, where visitors can pose for a souvenir photo in one of the free chairs set opposite cheating Cesar and Panisse! 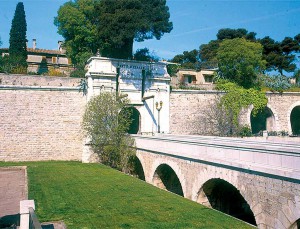 City centre – Place Armand Vallé
Along with the ramparts visible in the city’s Lices quarter, “Porte d’Italie” gate is one of the last remnants of the former city walls and a fine example of fortified architecture. Designed by military engineer Vauban and completed in 1791, the gate was used by Bonaparte to exit from the city on his Italian campaign. 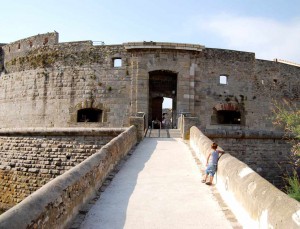 Mourillon quarter – Avenue de la Tour Royale
Bought up by the City Council in October 2006, the Royal Tower, locally nicknamed “the big tower” was the first defence post erected in the bay of Toulon. Packed with history, its construction by order of Louis XII began in 1514 and was completed in 1524. Occupied by the Germans in 1942, and fitted out with various antiaircraft equipment, it then closely escaped the American bombs. (Source : Toulon City Council)
The Tour Royale is open to the public in summer. Please contact the Tourist Office for details.

Exterior and groundfloor of the tower accessible 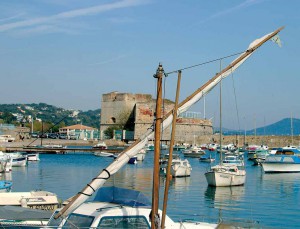 Mourillon quarter
Erected in 1696 by order of Vauban, the tower was originally named the “Tour des Vignettes”. Its strategic position at the entrance to the Bay was intended to ward off enemy attacks. The tower’s hour of glory came in 1707 at the time of the siege of Toulon led by Anglo-Spanish ships during the Wars of the Spanish Succession, when Louis XIV was fighting for the Spanish throne. Burned to the ground, the tower was subsequently rebuilt according to the original plans and renamed “Fort Saint-Louis”. Its setting ablaze is now commemorated every August 15 with a magnificent firework display. 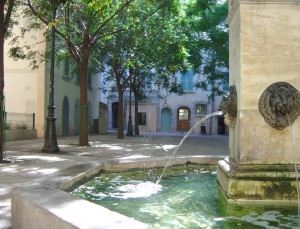 City centre
Toulon’s former title of “City of Fountains” is no coincidence; the city’s name actually originates from Telonus, the Celto-Ligurian goddess of springs and fountains. Toulon is still home to fifty or so fountains, including the extremely ancient “Panier”, “Pigne”, “Intendance” and “Tambourin”, or more recent “Globe”, “Poissonnerie” and “Mûrier”. And all have a watery story to murmur!